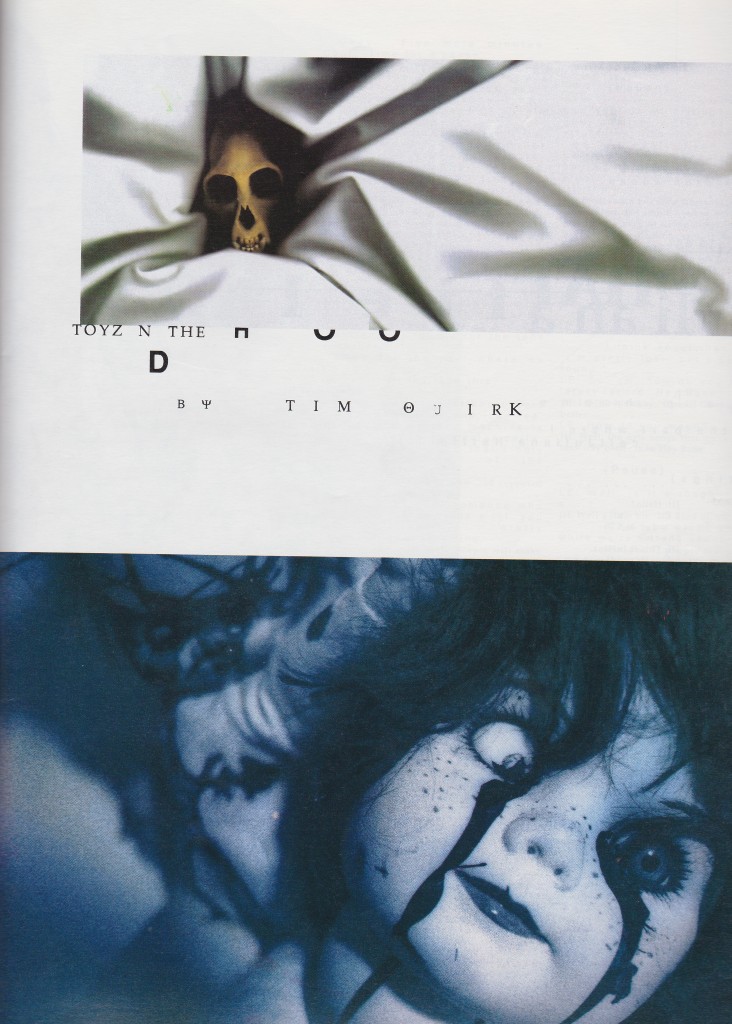 Nina Malkin from RAYGUN invited me to write for them after profiling Too Much Joy for an early issue. The interview somehow concluded with the band watching the Oscars with her, which would have involved a lot of drunken sarcastic yelling any year, but THIS was the year Rob Lowe danced with Snow White, so the screaming and snark were particularly intense. I guess I qualified myself as a pop culture critic that evening. This was the first (and, in retrospect, possibly the worst) of a number of pieces they published in the ’90s and only sometimes sent checks for. Half the fun of RAYGUN was that you couldn’t always actually read the text, so I’m scanning sample pages from the magazine but relying on my old WordPerfect drafts for the copy, so the two might not always match.

I went to the Kiddie City on Union Square in Manhattan to buy a squirt gun. Two songs on Too Much Joy’s new album, Mutiny, are about murder, and I can always use a stage prop. Besides, the chance I might electrocute one of the assholes with guitars makes our live show that much more exciting.

The good news is that great strides have been made in water pistol engineering since I was in grade school.  These things can now shoot a continuous stream of water up to thirty feet. The bad news is that they don’t look remotely like guns. Charlton Heston tells me the government makes it too tough to buy firearms. At least the ones he can buy aren’t painted fluorescent green and orange.

I don’t know who’s to blame here: idiot parents who think cops shoot five-year-olds with squirt guns; or idiot cops who shoot five-year-olds with uzis. All I know is I bought a toy called THE TOTALLY EXCELLENT M-16. The TOTALLY EMBARRASSING M-16 would be more appropriate: the stock is pink, the body is lime and the clip is orange. The gun cost me $14.99. The can of black spray-paint to turn this into a real toy was another $4.50. I haven’t bought the four C batteries yet.

The jungle-green soldiers of my youth have disappeared, too. Virtually all war-toys now come in various shades of beige, the better to blend in with all that sand between Baghdad and Tripoli. Guns, jets and plastic infantrymen all wear desert camouflage. There’s a whole line of army toys called DESERT FORCE. Each box boldly proclaims that it was MADE IN THE U.S.A.!, perhaps a subtle challenge to those pussy kung-fu turtles across the aisle. But the surest indication that war is cool again is Hasbro’s HALL OF FAME G.I. JOE ($19.99). You remember Joe. He was first mobilized in 1964 as a twelve inch action figure. Joe reflected the constant upgrading of our armed forces by just getting better and better (life-like hair, kung-fu grip, the ability to speak) for almost ten years until even the President decided the Vietnam War was a bad idea. Joe disappeared for a while, but Hasbro slowly brought him back in the early eighties, first in two dimensions as a cheesy afternoon cartoon, then in three as a tiny action-figure.

Well, Joe’s growing! The hall of fame model is “the classic, 12″ tall” doll, with “modern Battle Dress Uniform” (that means Desert Storm issue camouflage). The tight-lipped expression and the scar on the right cheek are the same as the ones I played with when I was five. The biographical sketch on the back of the box tells me that Joe (actually, this one has his own name: Hauser, Conrad S.) specialized in Han Chinese and Southeast Asian dialects at Airborne school. These skills must have come in handy at the factory, since he was made in China. But get this: Joe “returned for refresher courses in numerous Middle Eastern languages.”

There are three other Collector’s Edition Hall of Fame G.I Joes: Stalker, Conrad’s black counterpart, who likes to yell “Let’s party!” before attacking machine-gun nests (I’m not making this up); Snake-Eyes, who is as adept with a machine gun as he is at martial arts (a nod toward desert-storm-style coalition building?); and Cobra Commander, who seems to be the enemy. Each one comes with various weapons, including a 62mm combat assault rifle that makes modern-warfare noises when you push a button. A drunk girl in my apartment thought it sounded like chirping birds, but what do girls know about war anyway? 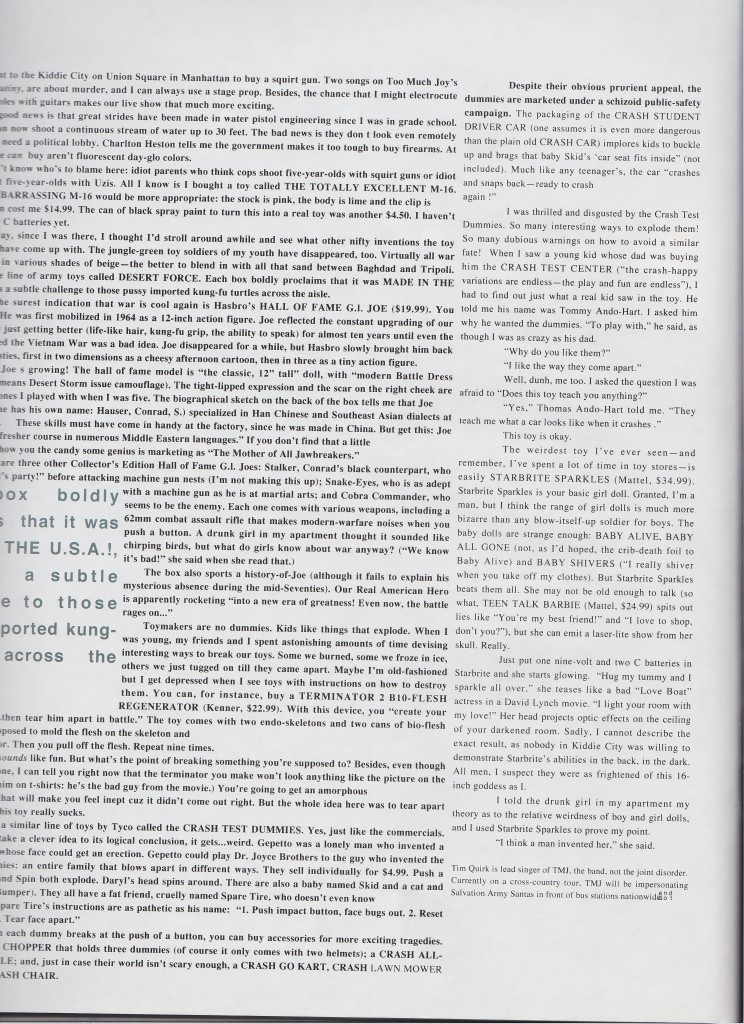 The box also sports a nifty history-of-Joe (although it fails to explain his mysterious absence in the mid-’70s). Our Real American Hero is apparently rocketing “into a new era of greatness! Even now, the battle rages on . . .”

Toymakers are no dummies. Kids like things that explode. When I was young, my friends and I spent astonishing amounts of time devising interesting ways to break our toys. Some we burned, some we froze in ice, and others we just tugged on till they came apart. Maybe I’m old-fashioned, but I get depressed when I see toys with instructions on how to destroy them.

You can, for instance, buy a TERMINATOR 2 BIO-FLESH REGENERATOR (Kenner, $22.99). With this device, you “create your own terminator. . . then tear him apart in battle.” The toy comes with two endo-skeletons and two cans of bio-flesh re-fills. You’re supposed to mold the flesh on the skeleton and create a terminator. Then you pull off the flesh. Repeat nine times.

See what I mean? Sure it sounds like fun. But what’s the point of breaking something you’re supposed to? Besides, even though I didn’t buy this one, I can tell you right now that the terminator you make won’t look anything like the picture on the box (you’ve seen him on t-shirts: he’s the bad guy in the movie). You’re going to get an amorphous blob of pink goo that will make you feel inept cuz it didn’t come out right. Normally you could tear that up and feel ok again. But the whole idea here was to tear apart something neat. This toy really sucks.

There’s a similar line of toys by TYCO called the CRASH TEST DUMMIES. Yes, just like the commercials. These Crash Test Dummies are an entire family that blows apart in different ways. They sell individually for $4.99. Push a button and Slick and Spin both explode. Daryl’s head spins around. There are also a baby named Skid and a cat and dog (Hubcat and Bumper). They all have a fat friend (cruelly named Spare Tire) who doesn’t even know how to die right. Spare Tire’s instructions are as pathetic as his name:

Although each dummy breaks at the push of a button, you can buy accessories for more exciting tragedies. There’s a CRASH CHOPPER that holds three dummies (of course, it only comes with two helmets); a CRASH ALL-TERRAIN-VEHICLE; and, just in case their world isn’t scary enough, a CRASH GO KART, CRASH LAWN MOWER and a CRASH N BASH CHAIR.

Despite their obvious prurient appeal, the dummies are marketed under a schizoid public-safety campaign. The packaging of the CRASH STUDENT DRIVER CAR (one assumes it is even more dangerous than the plain old CRASH CAR) implores kids to buckle up, and brags that baby Skid’s “car seat fits inside (not included).” Much like any teenager’s, the car “crashes and snaps back — ready to crash again!”

I was thrilled and disgusted by the Crash Test Dummies. So many interesting ways to explode them!  So many dubious warnings on how to avoid a similar fate! When I saw a young kid whose dad was buying him the CRASH TEST CENTER (“the crash-happy variations are endless — the play and fun are endless“) I had to find out just what a real kid saw in the toy. He told me his name was Tommy Ando-Hart. I asked him why he wanted the dummies.

“To play with,” he said, as though I were as crazy as his dad.

Well, duh, me too. I asked the question I was afraid to: “Does this toy teach you anything?”

“Yes,” Thomas Ando-Hart told me. “They teach me what a car looks like when it crashes.”

This toy is ok.

The weirdest toy I have ever seen is easily STARBRITE SPARKLES (Mattel, $34.99). Starbrite Sparkles is your basic girl doll. Granted, I’m a man, but I think the range of girl dolls is much more bizarre than any blow-itself-up soldier for boys. The baby dolls are strange enough: BABY ALIVE (Kenner, $26.99); BABY LOVES TO TALK (Toybiz, $49.99); BABY ALL GONE (not, as I hoped, the crib-death foil to BABY ALIVE); and BABY SHIVERS (“I really shiver when you take off my clothes“).

Starbrite Sparkles may not be old enough to talk (but so what: TEEN TALK BARBIE (Mattel, $24.99) spits out lies like, “You’re my best friend,” and “I love to shop, don’t you?“) but she can emit a laser-lite show from her skull. Really. Just put one nine-volt and two C batteries in Starbrite and she starts glowing. “Hug my tummy I sparkle all over,” she teases like a bad Love Boat actress in a David Lynch movie; “I light your room with my love.” Her head projects optic effects on the ceiling of your darkened room. Sadly, I cannot describe the exact result, as nobody at Kiddie City was willing to demonstrate Starbrite’s abilities in the back, in the dark.

I told the drunk girl in my apartment my theory as to the relative weirdness of boy and girl toys, and I used Starbrite Sparkles to prove my point.

“I think a man invented her,” she said.