76 dollars is the average donation we received when we launched an IndieGoGo campaign last year to fund that record before it existed. Even though anybody who wanted to could pre-order that album for just $10 through IndieGoGo, some combination of the perks we offered for higher donations and the good will we’d engendered among fans back when we were still recording and touring regularly saw most participants chipping in significantly more than the minimum required.

And 150 dollars is the average donation we saw in the first 24 hours of the IndieGoGo campaign we just launched for our next record, which will come out sometime next year. I expect that average to come down closer to the $76 we saw for our previous campaign by the time the fundraising offer closes, but the difference between where it is right now, where the last campaign wound up, and what we’re averaging on Bandcamp is a handy illustration of a principle I have been pontificating about for over a decade: music does not have one, constant value for all human beings on planet earth. Albums are not “worth” $10, and songs are not “worth” a dollar apiece.

Music is literally priceless, in that the same song has always been worth different things to different people at different times. And I’ve been convinced for most of this century that recognizing this simple fact is critical for any musician, manager or label trying to earn money making music in a digital age. Because once you accept that reality, you suddenly focus way less of your energy on how much a single play on Spotify earns, and way more on figuring out how to turn the casual listeners playing your songs on Spotify (or YouTube, AppleMusic, Tidal, etc.) into the kind of dedicated fan who will happily pay you 1,000x that amount to keep you recording.

My band isn’t special — our fans are, god bless them, but the principle behind the three numbers making me happy right now applies to every artist, in every genre, in every country, from random 14 year-olds just learning how to write and record songs all the way up to mega-superstars such as Adele and Taylor Swift. For the vast majority of people on this planet, Adele and Swift’s music is worth exactly the same as those 14 year-old’s: zero dollars.

But for some people, their music is worth much, much more. If you’re a musician, a big part of your job each day is making there be more of those people than there were yesterday.

I call this phenomenon pushing people up the pyramid. Think of all your fans — the ones you already have as well as the ones you could have if they only had a chance to hear you — as occupying different levels of a pyramid. The higher up the pyramid you go, the fewer fans you find, but the more dedicated each one is. 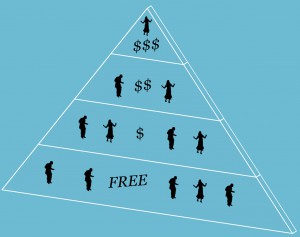 Most of humanity resides at the bottom level for most artists (like I said, even if you’re Adele, there are more people on the planet with zero interest in your latest single than people dying to give you money for it). If you’re a musician, your main concern is getting as many people at this level as possible just to hear your songs. In that regard, services such as Spotify and YouTube are your friends, rather than your enemies, because they make it easier than ever for potential new fans to discover you, at no cost to them.

Once they hear you, of course, you want the highest possible percentage of them to graduate to the next level of the pyramid — this is where most of the people who have not only heard your stuff, but who liked it enough to pay something for it, reside. Maybe they just keep streaming you on Spotify, but hopefully they commit something more, such as buying a single.

Then you want the highest possible percentage of those people to follow you to the next level. Maybe they loved that single they took a chance on so much they went ahead and ordered the full album, or bought a ticket to see you play when you passed through their town.

Hopefully, once they did, you impressed enough of them so much that they were compelled to climb even higher up that pyramid. At the tippy top are the people who like what you do so much that they have to own every album, and see every show, and wear every t-shirt you offer. KISS literally sells coffins with their logo and faces on it to the people at the top of their pyramid.

My band doesn’t do that, but we are letting our most dedicated fans commission songs about themselves or their loved ones. Making the most of this dynamic doesn’t really require dreaming up insane things to sell to your audience, though. A lot of our fans are donating $100 or more not because we’re dangling super compelling collectibles in front of them, but simply because they can afford it, because IndieGoGo and Bandcamp make it simple for them to do so, and because it makes them feel good to support a band that makes them happy.

Our IndieGoGo campaign isn’t focused solely on the people at the top of our particular pyramid, but it is based on the premise that anyone who cares enough to donate is already on at least level 2. I don’t know if the amount of money we raised through the last campaign or this one is “good” for an artist with our history. I just know it’s enough — enough to fund the recording of masters we will own forever, enough to hire a team of professionals to help us promote those masters (shoutout to the fine folks at XO Publicity!), and, maybe most importantly, enough to make doing all that feel like something more than spitting into the wind. Because we know before we begin that there are a bunch of people eagerly waiting to hear the results. I can only speak for myself, but getting a big advance from Warner Bros. thirty plus years ago was nowhere near as motivating as knowing some dude just paid $1,000 for my next record before it exists. I probably shouldn’t admit this, but that Warner advance made me kind of cocky. Whereas the $1,000 donation makes me terrified, in a good way — because whatever I create in response better fucking measure up.

Once we finish recording, though, our attention shifts to the bottom of the pyramid. That’s when we do whatever we can to get our new songs heard by as many people in that bottom tier as possible, and to push the highest possible percentage we can up to the next level.

This has always been hard, and it’s pretty tempting to blame the internet and services like Spotify for making it even harder than it used to be, since casual fans who used to pay $10 or more to buy your CD can now skip paying you anything at all. Personally, though, I think the industry has lost at least 20 years of potential progress by focusing so much energy on the wrong end of the pyramid. Because my band’s experience has convinced me the internet also makes it much easier to encourage listeners to keep climbing up it.

By all means, yell at Spotify and Google and Apple that they should be paying more per play. Just don’t stop there, because getting even a 10x improvement in the current per play rates is not going to make a meaningful impact in the life of the average musician. I’m far more pissed at Spotify for not giving me an easy, free way to tell anyone playing Too Much Joy on their platform about my IndieGoGo campaign. Building tools to let me do so would help me far more than paying labels and publishers more for every stream.

Not that those are mutually exclusive goals. I just know where I’m gonna put the bulk of my energy.