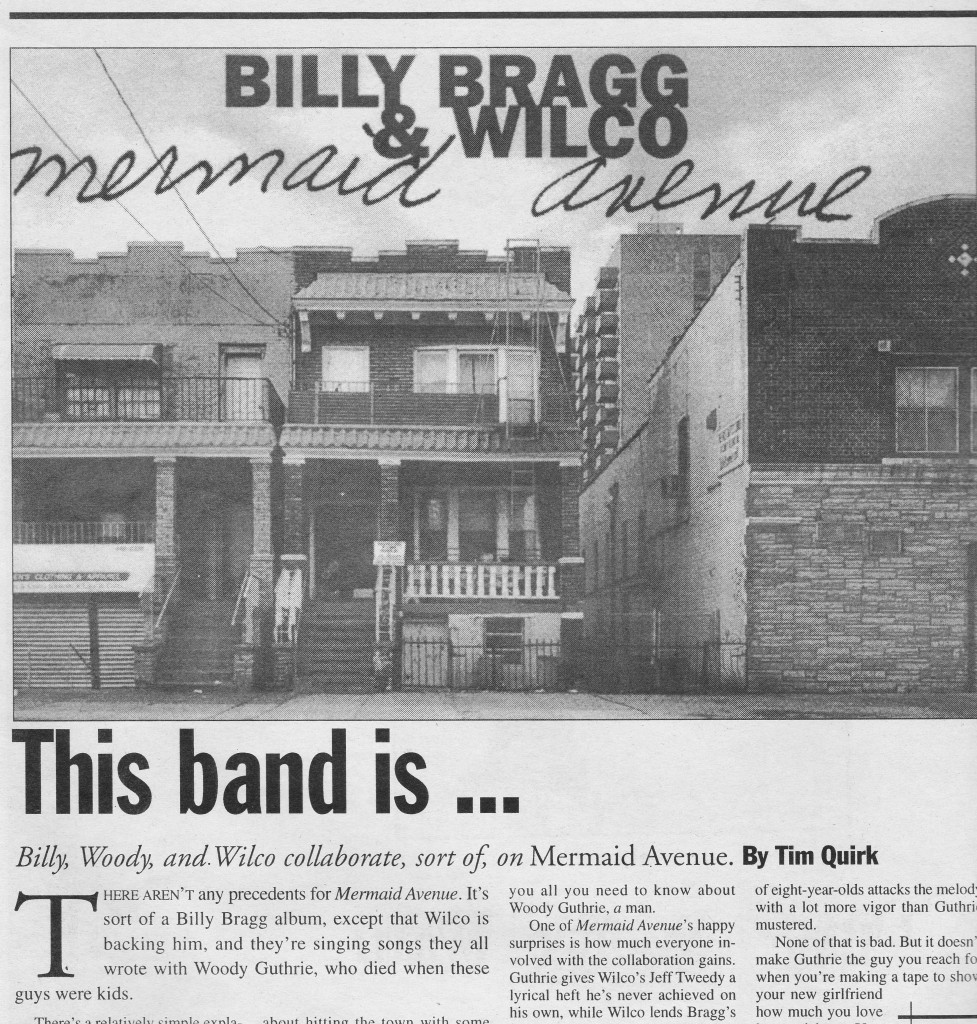 It’s a little harder to explain why the results are so incredible.

“Walt Whitman’s Niece,” the opening track, offers one clue: if you’re expecting (or dreading) a solemn, noble tribute to a leftish folk icon, this song basically tells you to piss off. It’s a raucous shout-along about hitting the town with some sailors, getting drunk, and getting laid. Imagine a bawdy limerick written by the Mekons: even at its stupidest, you’re having too much fun to feel ashamed. Besides, there’s always the chance you might be missing some clever point that’s struggling to get made.

There isn’t really some precious pearl of wisdom hiding at the bottom of “Walt Whitman’s Niece,” but the suspicion that there must be, coupled with the fact that you eventually stop giving a damn, is part of what makes the entire album so wonderfully, deeply engaging. A strange thing happens as you listen to the fifteen songs on Mermaid Avenue: despite the various and sundry contributors, despite the time lag between the composition of the lyrics and the music, you sense a singular presence. This record might not tell you much about Woody Guthrie, the man, but it tells you all you need to know about Woody Guthrie, a man.

One of Mermaid Avenue‘s happy surprises is how much everyone involved with the collaboration gains. Guthrie gives Wilco’s Jeff Tweedy a lyrical heft he’s never achieved on his own, while Wilco lends Bragg’s arrangements an organic quality they usually lack — even with accomplished backing musicians, Bragg’s poppiest numbers always sound built, never grown. And Woody Guthrie doesn’t just get remembered, he gets to live and breathe.

Unless you frequent open mike nights at coffee houses, or work at Down Home records, chances are good you know as much about Woody Guthrie as I do: he wrote “This Land is Your Land.” He was Arlo’s cooler dad. And he inspired Bob Dylan. Perhaps, if you saw a picture of him and his acoustic guitar, with the scribbled motto: “This machine kills fascists,” you were inspired to seek out some actual records the guy made. If so, you had to balance the exciting discovery that “This Land” has some rabble-rousing verses they didn’t bother teaching you in grade school with the more depressing realization that your average class of eight-year-olds attacks the melody with a lot more vigor than Woody mustered.

None of that is bad. But it doesn’t make Woody Guthrie the guy you reach for when you’re making a tape to show your new girlfriend how much you love her, either. You might want to put Billy Bragg singing “She Came Along to Me” on that tape, however. Or Jeff Tweedy’s beautiful vocal on “California Stars.” And it’s the fact that you would probably choose those songs over something from an old Billy Bragg or Wilco record that makes me say this is the best album of the year and everyone should stop reading this article and go buy it right now.

There are political songs on this record. “Christ for President” is a timely reminder that there are other definitions of prosperity than the one our nation is currently embracing. “Eisler on the Go” imagines Woody in the hot seat before the House Committee on Un-American Activities. There are also bittersweet reminiscences, surreal fantasies, and children’s songs (although I sincerely doubt that Woody chose to put Tweedy’s sleazy emphasis on the refrain, “kiss-a-me now” when he was singing “Hoodoo Voodoo” to his kids).

The point is that the political stuff makes a lot more sense as part of a life, rather than all of it. And the political stuff is most loveable when it doesn’t make any sense at all, as in the above-mentioned “She Came Along to Me.” It’s mostly a song of wonder, in which Bragg, as Woody, ponders the bizarre energy that snared the woman he loves: “sometimes the most lost and wasted/ attract the most balanced and sane.” But it’s not too long before he starts imagining the future consequences of such pairings: “all creeds and kinds and colors of us are blending/till I suppose ten million years from now we’ll all be just alike/ same color, same size all working together.” It’s hard to get cynical about a utopian dream when it stems from one folk singer’s true love for his girl, so when he adds “and maybe we’ll have all of the fascists out of the way by then,” I just want to hug him, even if a baser part of my personality feels like grabbing him by the lapels and shouting, “What the fuck is fascism if it’s not everybody looking exactly alike and doing the same thing!?”

But here’s where the record kicks my bitter ass. Right when I’m thinking bad thoughts, Billy talks back to the lyric. He sings the line Woody wrote: “Maybe we’ll have all of the fascists out of the way by then,” and, for the only time during the entire record, as far as I can tell, adds his own words: “Maybe so,” he says. Instantly, this whole endeavor stops being a tribute and becomes a conversation. Woody Guthrie has been resurrected.

It’s a neat bit of magic, honoring Woody Guthrie’s vision without casting it in plaster and asking us to bow. Guthrie’s lyrics keep asking if he’s done enough, the people singing them insist of course he has. But the best part of Mermaid Avenue is that you never hear Woody sigh contentedly and lay back down. Once Guthrie arrives, he reaches for his guitar, lights a cigarette, and decides to join the party.

It’s not all fun and games — he’s got quite a bit on his mind — but it’s great to have him back.