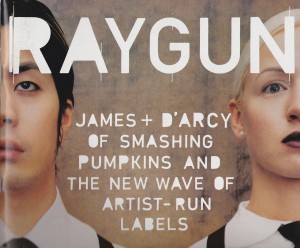 was the cover story for Raygun #42 in December, ’96. The magazine got a cover shot that would help sell issues, while James and D’arcy got a chance to promote the label they’d recently formed with Mercury. My cynicism about the venture’s odds of success turned out to be justified, though it brings me no satisfaction to say so. The Fulflej LP D’arcy and James were so excited about didn’t excite the kids quite the way James had anticipated. The band’s Wikipedia page sums up what happened after that thusly: “Their song, ‘Shift Into Turbo’ was featured in Turbo: A Power Rangers Movie, which came out the following year. Fulflej also recorded another album, ‘To Keep A Long Story Long’ in 1998, though it was only released through MP3.com. The band called it quits in 2000.”

Early in 1980, when the Clash came to New York City to play the Palladium, my friend and I joined the majority of the crowd in booing opening act Joe Ely. I did this mostly because I was a fifteen-year-old dunderhead, and hating the opening acts at rock concerts was as much a part of the ritual back then as holding up lighters when our beloved headliners left the stage. Ely’s songs were all pretty slow, and his voice was pretty low, so the crowd eventually got louder than the guy performing. It was painful and embarrassing enough that the members of the Clash felt compelled to come out on stage and dance around in trench coats while Ely sang, just so the crowd would start clapping, which, like good little robots, we did.

Eight years later, someone gave me a Joe Ely tape: Lord of the Highway. My friend and I were touring with our own band now, and knew what it was like to play for a roomful of people who just wanted us to hurry up and finish so whatever group they actually paid to see could take the stage. Experience and maturity had refined our tastes, so we were ready to listen to the tape with open ears.

We decided he still sucked, and tossed the cassette out the window of our van, figuring, if he was the Lord of the Highway, he’d be pleased. END_OF_DOCUMENT_TOKEN_TO_BE_REPLACED