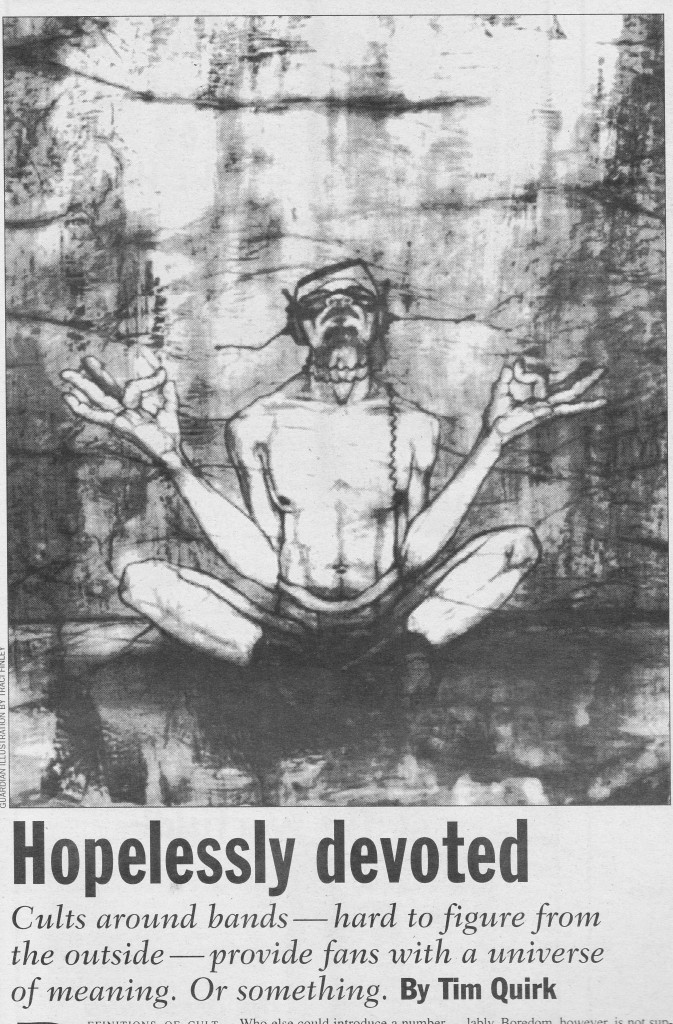 And I saw something impossible: she was bored.

Granted, the band wasn’t playing terribly well. Actually, they kind of sucked that night. But even a bad Mekons show is worth seeing. You might get disgusted, you might be amazed, you might laugh uncontrollably. Boredom, however, is not supposed to be an option. 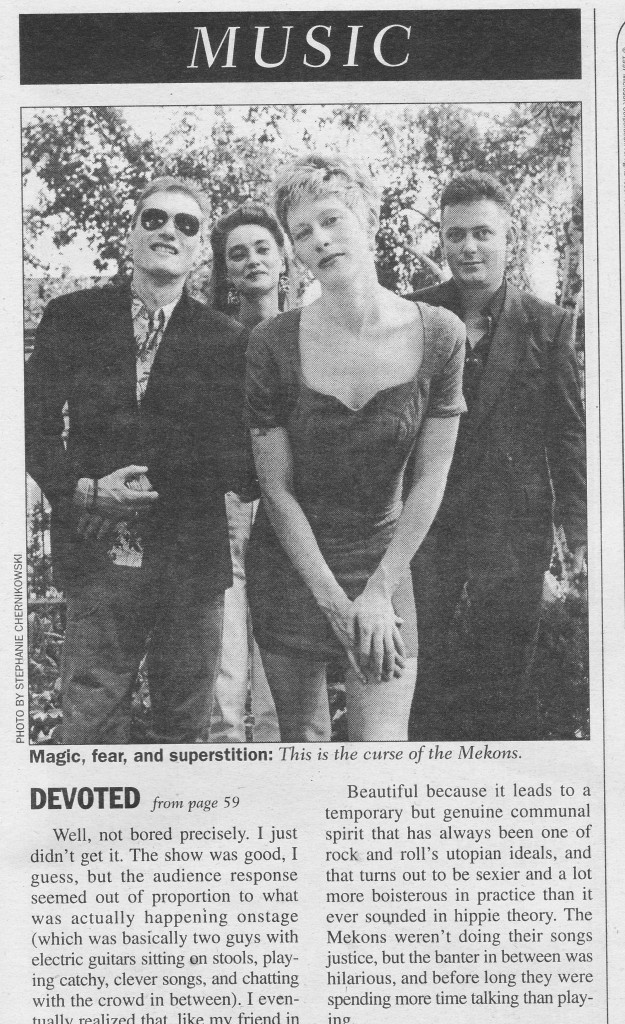 Well, not bored precisely. I just didn’t get it. The show was good, I guess, but the audience response seemed out of proportion to what was actually happening on stage (which was basically two guys with electric guitars sitting on stools, playing catchy, clever songs, and chatting with the crowd in between). I eventually realized that, like my friend in New York, I simply couldn’t see the show everyone else was watching.

There’s a reason these types of bands are called cults. The very term implies a status that can only be bestowed by the audience, fans who somehow surpass commonly accepted levels of devotion. The tricky part is, once fans attain that mystical level of attachment, the band ceases to be a cult, to them. From the outside, cults are insular and unfathomable. On the inside, however, there’s a limitless universe of meaning, because you actually worship a lot more than just a band.

The real show doesn’t take place on stage; it exists in mid-air, at some point between the band and the crowd. When you’re a fan, you don’t just hear the song that’s being played, you remember the first time you ever heard it, the friend you put the song on a tape for, all the other times you’ve seen the band do it live, who was there, how you felt, and what’s different about it this time. Now, you can say that to some extent about practically any show, but you end up talking in a hopelessly abstract way. With cult bands, the phenomenon is distilled enough to be almost observable, because so many people in the audience share the same secret world of connections and memories. The result is either beautiful or depressing.

Beautiful because it leads to a temporary but genuine communal spirit that’s always been one of rock and roll’s utopian ideals, and which turns out to be sexier and a lot more boisterous in practice than it ever sounded in hippie theory. The Mekons weren’t doing their songs justice, but the banter in between was hilarious, and before long they were spending more time talking than playing. The show devolved into an extended conversation with the audience; whenever they did bother to play another song, it was mostly so we would all have something else to talk about when they were done. At one point, Sally Timms asked, “I’ve been wondering. Are any Mekons fans successful?” The ripple of awe, mirth and embarrassment that swept through the crowd when we realized none of us were raising our hands was heady, and complicated, and unreproduceable. For most of us, anyway.

And that’s what makes cult shows depressing, too: the flip side of all that magical togetherness is an exclusive, self-referential insularity, the sense that you have to join some kind of club before you can enjoy the full experience. The fact is, I get a little tense whenever I recognize audience members from past Mekons’ gigs, because I don’t really want to know what else we have in common. (I may, of course, just be a bastard. For all I know, everyone else at the Mercury Lounge that night had a pleasant dinner together before the show). And when my friend looked confused, instead of transported, I got another little hint of something darker binding the crowd.

Clearly, the Mekons are pretty important to me, and I may have been partly responsible for the befuddled look on my friend’s face: I’d given the band a ludicrous build-up, explaining (in retrospect, I admit, this was probably  goofy, but I was sincere at the time) they were the closest thing I had to a religion, and confessing that, when I was a morose adolescent, I once tried to make a list of reasons not to kill myself, and the only thing I could come up with was the fact that I’d never get to hear the next Mekons record.

So you can understand why I might take anyone’s failure to appreciate the Mekons’ excellence as a personal affront. When you’re that devoted to a group, you kind of need their talent to be undeniable. Otherwise, you know, there might just be something wrong with you.

I think that need, when it’s shared by enough people, explains the bizarre dynamic between what I’m reluctantly calling cult bands and their followers, and that need also explains why the relationship was easier for me to see at the Jazz Butcher show, when I had nothing personal invested in the act. Your shared devotion reinforces itself, and makes up for the fact that you never hear these guys on the radio. It’s pretty exciting to love something unconditionally, and more exciting when the thing you love is a secret, of sorts. Yeah, there’s power in 20,000 kids in an arena shouting out a chorus while the lead singer puts his hand to his ear, but it’s also eerie and kind of false, and it’s no match for 200 drunk adults in a club all shutting up whenever the band starts playing. The thing is, that equation only really works when each of the 200 drunks loves the band precisely as much as the people to either side.

At the Jazz Butcher show, I was person number 201. But I still had a good time, and I spent a happy hour outside the club afterwards, waiting for Mr. Pat Fish with my friend, who wanted to have the Jazz Butcher autograph his truck. To be honest, my buddy mostly wanted to do this to piss off his wife. Nonetheless, it’s a perfect metaphor for the dual nature of cult devotion, a worship that’s both imploring and imposing. 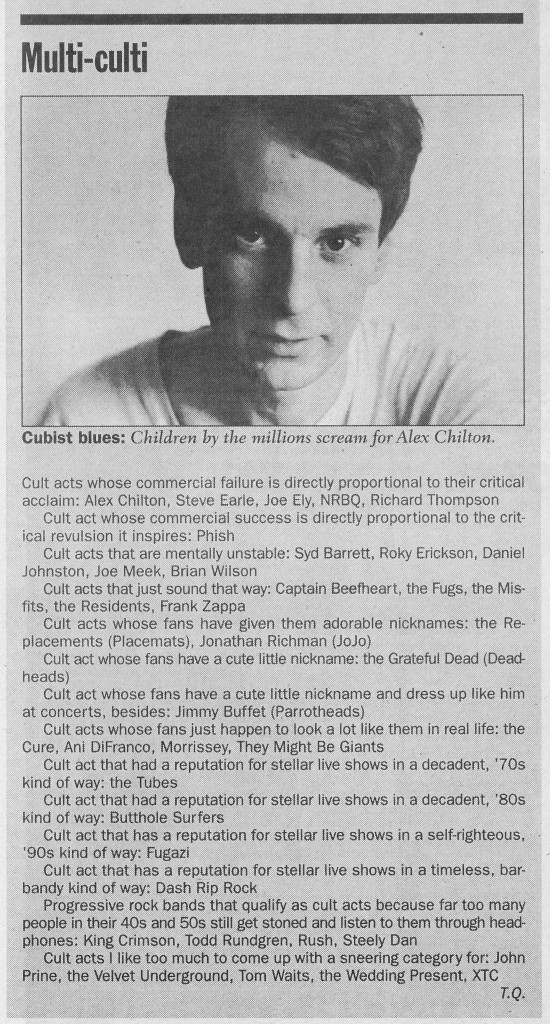