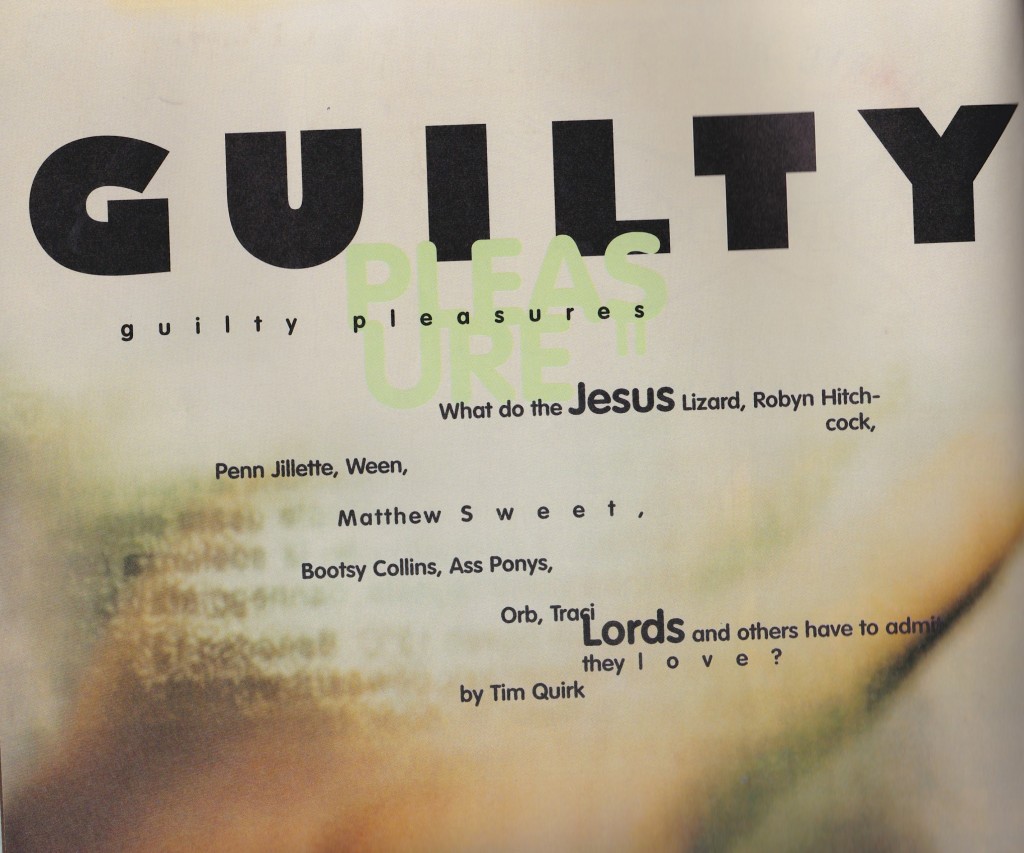 ask-a-dozen-artists-the-same-question piece, but this one had some of my favorite responses, ever. I still think about Robyn Hitchcock’s answer any time I have some white wine or, well, any of the other things he listed. And Dean Ween hints at a genuinely profound truth when he analyzes how things you’d never do in a car don’t seem wrong at all when you do them in a boat.

We are all so goddamned cool. Yes, you too, dear readers. Just by opening this very magazine, you’ve gained admittance to an exclusive club. Consider the wacky fonts you can only read upside down in a mirror our version of a granite-faced doorman, making sure the unworthy remain on the wrong side of that velvet rope. The headache you get for actually deciphering every word is the cover charge. But you made it; you’re inside. There are some famous musicians by the bar. Well, maybe not famous. But cool. Just like you.

Except you’re not really cool, are you? Deep down, you know it. Maybe you have a secret fondness for books about courageous elves. Perhaps you’ve eaten a peanut butter and jelly sandwich for lunch every day of your life for the last twenty years. It’s just possible you can’t stop humming Ace of Base’s “The Sign.” You could be like me, and have all these problems.

It’s OK. Most musicians aren’t that cool, either. If you want to prove it, just ask a bunch of them what their guilty pleasures are.

“I’m a little embarrassed to admit that I have watched MTV before. But rarely,” says The Jesus Lizard’s David Yow, totally refusing to get into the spirit of things. Come on, David. Try again. “I like a song by R.E.M,” he offers, still clinging to hipsterdom.

This won’t do. Everybody has a secret geek somewhere inside, even David Yow. It takes a lot of prodding, but he finally relents. “I tend to stay up way too late and play on the computer. Graphic stuff. I never go to bed with my wife anymore. I get a huge kick out of messing with different images.” What images, pray tell, does Mr. Yow like to mess with? “I had downloaded some photographs of women in bikinis. I was taking their bikinis off.”

One little chink in that dam of sophistication is all it takes. Soon the confessions are flooding out. Yow liked Sleepless in Seattle. And that old Pepsi commercial with the little blonde kid laughing as a bunch of puppies crawl all over him, “just about made me cry.” He’s even proud of his pornography collection. “It’s not top secret. They’re English magazines. One of ‘em’s called Overage Fatties. It’s all women, fifty or older, who are all fat, and naked. I think it’s too funny to be ashamed of.”

Playboy, apparently, is the only magazine Penn might want delivered in a plain brown wrapper, but not for the usual reasons. “I wrote a few things for Playboy, so they gave me a subscription. Some people would say they sit down and read Playboy and feel guilty about it because they consider it some sort of dirty magazine. I feel guilty about it because it just seems like watching television. It’s so clean and family and everything. It just seems kind of, in a certain sense, anti-sex.”

Watching television is verboten, in Penn’s universe. “I don’t watch any television. I would watch television and feel like my life was going away. I guess it’s not really guilty, it’s more . . . stupid.” Friend of Penn and legendary one-named producer Kramer also avoids TV broadcasts, although he plops himself down on his couch nightly, slips a tape in the VCR, and stuffs himself full of ice cream. “I enjoy Vanilla Fudge Haagen Dazs, and I rarely settle at just one quart. And I usually feel pretty bad afterwards.”

All-night movie marathons aside, Kramer insists his life is guilt-free, “utterly and completely. I do everything else that I do with absolutely no shame.” Whereas Robyn Hitchcock says, “I have a lot of guilt, but it’s not stuff that brings me pleasure.” Then again, he has “a lot of pleasures, but they’re not things that make me guilty. It’s important to be able to enjoy yourself. You could argue that nobody in the western world is entitled to do that. The gap between us and everybody else is so obscene. Are we entitled to even one meal a day or two orgasms a week, when two thirds of the world is in the shit, and largely because we’re not in the shit? In a way, all pleasure in the west should be guilty. But within that terrifying context, I eat a lot, and I like drinking a lot, and I like sex a lot . . . I still smoke. I really like white wine, bourbon and port.”

Like Penn and Kramer, Robyn is an anti-television crusader. “And every time I get a public platform I say as much!” But don’t sell your Zenith stock just yet. The Mr. T Experience’s Dr. Frank watches enough for all three of them. “I watched the Saved by the Bell marathon last week. Not even the classics. I watched all the way through the college years.” Dr. Frank doesn’t feel guilty about his feat, however. “Nothing is too stupid for me to get enthusiastic about.” In case we had any doubts, he launches into a fifteen minute speculation about what’s in store for the recently deceased Bewitched star, Elizabeth Montgomery, when she gets to heaven. Dr. Frank is worried, because the nosy antagonist from I Dream of Jeannie is also dead. “They don’t only have the Kravitz’s, but now they have  Dr. Bellows up there, too. And he’s a lot tougher of a skeptic and opponent. Dr. Bellows is gonna always be trying to get God to come over to the Stevens’ apartment.” 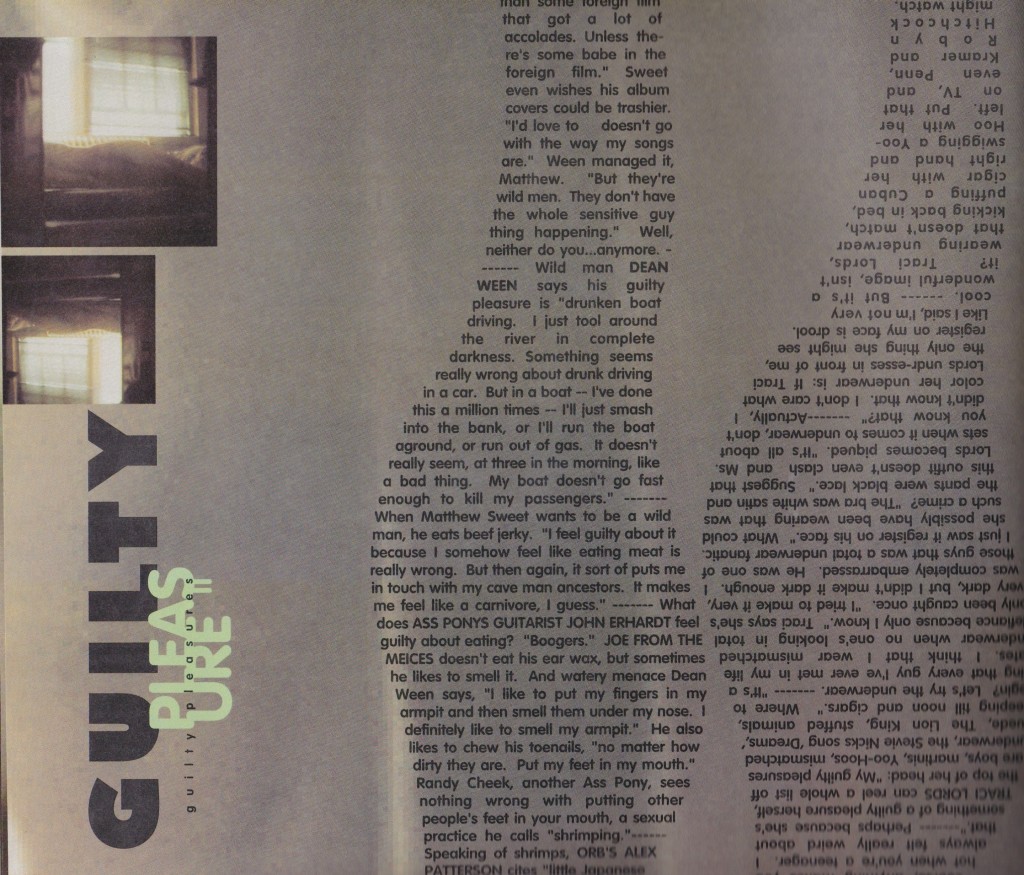 Sweet is equally unashamed by the lowness of his brow. “I’d much rather see a trashy teen movie with a girl I thought was cool in it, than some foreign film that got a lot of accolades. Unless there’s some babe in the foreign film.” Sweet even wishes his album covers could be trashier. “I’d love to make a really sleazy record cover sometime, but I know all the girls would hate it and think I’m a jerk. I might go over the edge and do a sort of Ohio Players record cover, but it so doesn’t go with the way my songs are.” Ween managed it, Matthew. “But they’re wild men. They don’t have the whole sensitive guy thing happening.” Well, neither do you, anymore.

Wild man Dean Ween says his guilty pleasure is “drunken boat driving. I just tool around the river in complete darkness. Something seems really wrong about drunk driving in a car. But in a boat — I’ve done this a million times — I’ll just smash into the bank, or I’ll run the boat aground, or run out of gas.  It doesn’t seem really, at three in the morning, like a bad thing. My boat doesn’t go fast enough to kill my passengers.”

When Matthew Sweet wants to be a wild man, he eats beef jerky. “I feel guilty about it because I somehow feel like eating meat is really wrong. But then again, it sort of puts me in touch with my cave man ancestors. It makes me feel like a carnivore, I guess.”

What does Ass Ponys guitarist John Erhardt feel guilty about eating? “Boogers.” Joe from The Meices doesn’t eat his ear wax, but sometimes he likes to smell it. And watery menace Dean Ween says, “I like to put my fingers in my armpit and then smell them under my nose. I definitely like to smell my armpit.” He also likes to chew his toenails, “no matter how dirty they are. Put my feet in my mouth.” Randy Cheek, another Ass Pony, sees nothing wrong with putting other people’s feet in your mouth, a sexual practice he calls “shrimping.”

Speaking of shrimps, Orb’s Alex Patterson cites “little Japanese girls” as his guilty pleasure. Is that little as in short or little as in young? “They’re all pretty little, aren’t they?” he answers, cryptically. All right then, if they were standing on line at Space Mountain, would they be above or below the height requirement? “Probably below.”

When it comes to sex, some artists just like to watch. Bootsy Collins says, “The guilty pleasure that I’m most embarrassed about is: when I went to an orgy and all I could do was watch. I had promised myself that I was going straight and cleaning up my life, so I just watched. It was great!” Lida Husik has fond recollections of living with a male prostitute. “The wall between our rooms wasn’t really a wall. I remember balancing on my bureau and moving the mirror really quietly.” Scary booger-eater John Erhardt knew something was wrong in high school, when he would get excited by “any rape scenes in films. Of course, anything makes you hot when you’re a teenager. I always felt really weird about that.”

Perhaps because she’s something of a guilty pleasure herself, Traci Lords can reel a whole list off the top of her head: “My guilty pleasures are boys, martinis, Yoo-Hoos, mismatched underwear, the Stevie Nicks song ‘Dreams,’ suede, The Lion King, stuffed animals, sleeping till noon and cigars.”  Where to begin? Let’s try the underwear.

“It’s a thing that every guy I’ve ever met in my life hates. I think that I wear mismatched underwear when no one’s looking in total defiance, because only I know.” Traci says she’s only been caught once. “I tried to make it very, very dark, but I didn’t make it dark enough. I was completely embarrassed. He was one of those guys that was a total underwear fanatic. I just saw it register on his face.” What could she possibly have been wearing that was such a crime? “The bra was white satin and the pants were black lace.” Suggest that this outfit doesn’t even clash, and Ms. Lords becomes piqued. “It’s all about sets when it comes to underwear, don’t you know that?”

Actually, I didn’t know that. I don’t care what color her underwear is: If Traci Lords undresses in front of me, the only thing she might register on my face is drool. Like I said, I’m not very cool.

But it’s a wonderful image, isn’t it? Traci Lords, wearing underwear that doesn’t match, kicking back in bed, puffing a Cuban cigar with her right hand and swigging a Yoo-Hoo with her left. Put that on TV, and even Penn, Kramer and Robyn Hitchcock might watch.